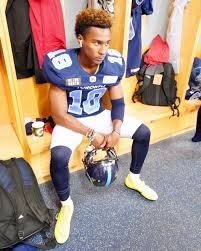 Donald De La Haye , also known online as Deestroying, is a Costa Rican-American YouTuber and former kicker in college football. He played college football at the University of Central Florida. De La Haye is known for his videos demonstrating his kicking ability as well as his sports-related skits and vlogs talking about his life journey. He also made news while in college when the NCAA banned him for profiting off his name, which has sparked reform for student athlete compensation.